Chicago Births at Record Search: When the Index Doesn't Match the Record 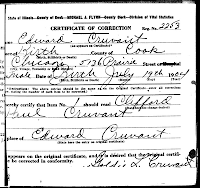 My husband pointed me to a blog called "TransylvanianDutch" which mentions the Cook County birth records online at FamilySearch Record Search. The author spotlights a birth record that's indexed as "Clifford Paul Cruvant" but clearly says "Edward Cruvant" and asks "What was the indexer looking at?" He goes on to say, "I want to know what that document is, what other information I might expect to find on it, and where I can get a copy of it."

I think I can be of help here.

The indexer must have been looking at the Certificate of Correction which was filmed just after the original birth certificate. This correction form doesn't seem to be included with the linked records on the FamilySearch Record Search site but it is available on Family History Library Film 1288077. The Certificate of Correction is numbered the same as the birth record and it includes the child's name as it appears on the certificate, the corrected name, the birth date and address, and the name of the person who submitted the correction. I suspect it also includes the date the correction was made, but the bottom part of this particular record isn't readable.

In a similar instance, one of my clients found an index entry for a birth register page that included a father's name, but that information was covered by a piece of paper attached to the register page on the linked scan. (The paper was probably a birth certificate form or a correction.) On the film, though, the next image is of the same page with the paper lifted to show the information underneath.

John said…
Thank You! You're wondeful for scanning that in for me.
8:23 PM

Julie said…
Thanks to both you and John for your posts. I have a few that I am wondering if there are corrections for. For example, I have someone who was born Timothy, but went his whole life as Thomas (including legal docs). Then I have a few blank name certificates, that I am able to identify by sex and year only because I already had names. May need to get my hands on that film!
2:51 PM