August 10, 2011
Note: If you haven't been following my posts, you can find background information for the search in The Search for Mrs. Nelson and Child Begins.

The researcher tells me that Sigurd was born 13 January 1894 in Norway and I've decided to try to use that information to find a matching record in Ancestry.com's World War I Draft Registration Cards, 1917-1918.

I usually start with bare bones information to see what I'm up against and a search for "sigurd nelson" yielded 316 matches--to many to scroll through at this point. I edited the search and added a birth year of 1894 +/- 2 years. That narrowed the search to 218 results. I'm not 100% sure that he was living in Cook County at the time he would have registered, so I added a January birth month. This gave me three results.

The birth dates for the first and third were close enough to earn a careful look.

The first man was married and was claiming an exemption because of his wife and because of his work for the telephone company. He was born in the United States. It's likely that he's the Sigurd A. that I'm inclined to rule out based on yesterday's research. (See Post 2)

The third man was single, born in Christiana, Norway. He was employed as a car repairer for a railroad. Checking my notes, the researcher hasn't mentioned Sigurd's birth town but he did give me additional information. 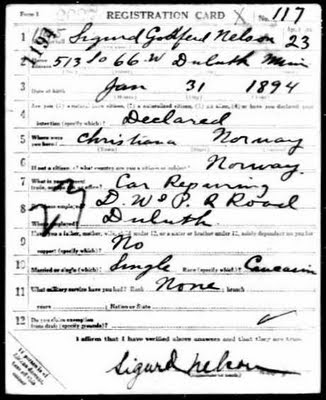 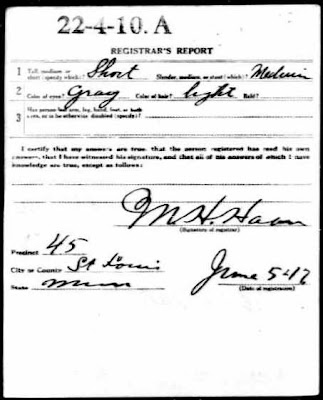 Sigurd had these siblings:

Their parents were Johannes Magnus Nilson 1852 and Anna Kristine Kristensen 1858.

I decided to look to for a draft registration card for Conrad to see where he was born. Searching with the birth month and year returned 384 possible matches, none with the exact birth date. I narrowed the search to New Hampshire with no luck. Scanning down the list, though, I found a John Emanuel Conrad Nelson born 11 July 1885 living in Duluth. (It wouldn't surprise me to find an unmarried brother living in the same place as a married brother especially since the researcher had suggested that Conrad might have taken care of Sigurd's wife and child when he went off to war.) This man's wife is listed as "Caspara" which matches the name the researcher gave me. I was hoping that the addresses on the two cards would match, but they don't. 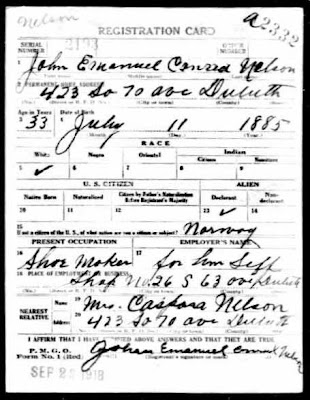 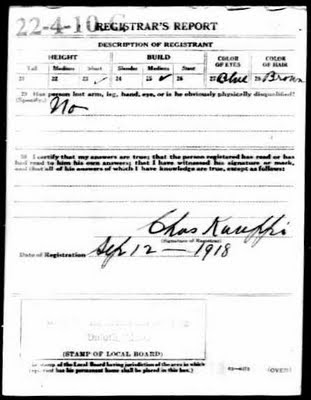 I'm not one to jump to conclusions but when something seems promising, I like to follow up. I think my next step will be to find out more about this Sigurd and Conrad Nelson.