October 18, 2017
Today's post focuses on Cook County coroner's death certificates, 1879-1904 which can be accessed for free on FamilySearch if you visit a Family History Center or an affiliate library.

What is a coroner's death certificate?

If a Cook County death occurs under unusual circumstances--homicide, suicide, or accident, for example--or if the cause of death is unknown, the coroner is called in to investigate. Between 1879 and August 1904, two records were created when that happened: a coroner's inquest record and a coroner's death certificate. The records are related, but they're not the same. (If a person died from natural causes, there was no inquest and a "regular" death certificate was created. And, after 1904, the results of the inquest were noted on the "regular" certificates.)

Here's an example of a coroner's death certificate.


Notice it lists the "verdict of the jurors" rather than a "cause of death." The other information is similar to what would be found on a regular death certificate, but it's not as extensive. The undertaker and cemetery names are written in the margin and the death certificate number is written at the bottom. This is typical of these records.

When to Look for a Coroner's Death Certificate

There are two times you would search for a coroner's death certificate:

1) When you have a newspaper article mentioning an accident, homicide, etc.

2) When you look for a "regular" certificate on a FamilySearch film (or the digitized equivalent) and find a gap in certificate numbers or a "Missing" note where the record should be.

How to Look for a Coroner's Death Certificate

If you have a name and a death date, you can go straight to the coroner's death certificate images but I highly recommend taking the time to quickly search the name in the Cook County Coroner's Inquest Index, 1872-1911. If the name is there (for deaths that happened up through August 1904), you can be certain the record you're after is a coroner's certificate, not a regular certificate, and that certainty is important. Why? Because some of the coroner's death certificates are badly out of order on the films (or digitized equivalents) and it's good to know you're searching for something that should exist.

Once you've confirmed you should be looking for a coroner's death certificate, here's what to do:

1) Note the name, death month, and year from an index or newspaper article. If you're using an index, note the certificate number as well.

2) Go to the Family History Library catalog entry for the  Cook County coroner's death certificates, 1879-1904 and select the correct film based on the death date. Click on the camera icon to view the digital images. (You will need to be at a Family History Center or an affiliate library to gain access.)

3) Use the high/low number game to locate the section of records that matches the month, year, and first letter of the surname you're looking for. The images may be in reverse chronological order.

4) Once you've found the right section, use the certificate number from the Illinois Statewide Death Index, Pre-1915 to zero in on the right record or browse the images moving forward and/or back to locate the match.

How to Handle Tough Searches

The four steps mentioned above describe the ideal situation but, unfortunately, it's not always that easy. If you browsed through the records on some films, start to finish, you'd notice that clumps of records are out of order--almost like someone dropped a filing drawer and didn't quite put things back in correctly. And you would notice that some individual records are so far out of a logical sequence, they would be nearly impossible to find.

If you bump into a difficult film, you may need to go through the images systematically, perhaps jumping forward 5-10 records at a time, to find records for the correct month, year, and first letter of surname.

What if You Just Can't Find the Matching Record?

With effort, it's likely you'll find the record you're after, but if you can't, try searching the Illinois, Cook County Deaths, 1878-1994 index at FamilySearch. This index includes entries for individuals who had coroner's death certificates and it includes extracted information. Something--even if it's a derivative record--is better than nothing.

Here's the matching entry for Frank whose certificate is shown above. 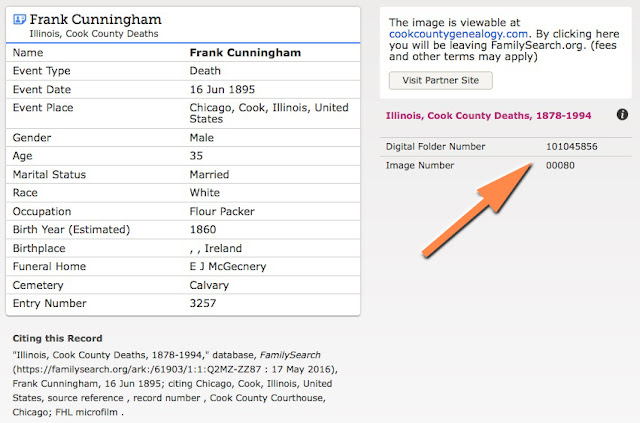 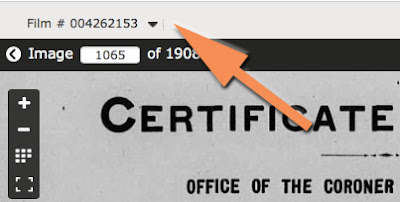 I suspect the information in the index was extracted from recently-created images of the original records, not from images scanned from film and I was not able to use the digital folder number from the index to locate the actual records in the FamilySearch catalog. (If you are able to find that folder number in the catalog, please let me know.)

Getting at the Certificates from the FamilySearch Index

2) If there's a match (and in this case there will be), go to the Cook County coroner's death certificates, 1879-1904 entry in the FamilySearch catalog and follow the four steps listed under "How to Look for a Coroner's Death Certificate" above.

3) If there isn't a match, you will need to look for a "regular" certificate. Here's how:

b. Go to the Wilmette Family History Center's key to pre-1916 Chicago death certificate films and use the death date and certificate number to choose the correct film.

d. If you have an image number, use it to go to the right record. If not, browse using the certificate number.

Finding Chicago death records isn't hard, but it is complex. If you have questions, feel free to email me through my chicagogenealogy.com website. I'm always happy to help.