Have you heard about the Family History Library Record Lookup Service? It's a very convenient way to obtain digital copies of Chicago vital records.

If you're familiar with FamilySearch's Cook County indexes, skip to the bottom of this post to find out how to use the lookup service to get copies of the records. If you're not, skim the quick tutorial on finding index entries, and then continue on to learn how to get the corresponding images.

Start by searching a FamilySearch index like the ones linked below.

Using a death certificate search for Marcia Mahala Smith as an example, search the Cook County death index. The two matches are shown in the image below.

Click on Marcia's name to open a new window on the right of the screen. 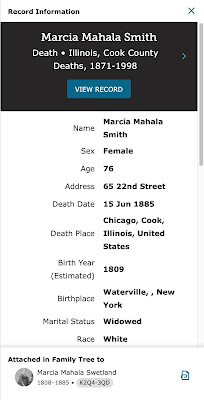 Click on "view record" moves to a new screen. 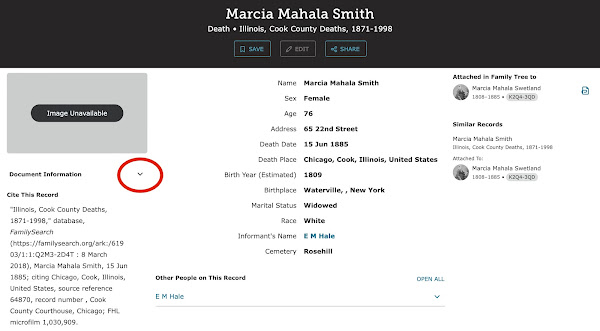 "Image unavailable" means the certificate can't be viewed on FamilySearch from a home computer because of copyright restrictions, but don't stop there.The arrow circled in red is the key to obtaining a digital copy of the certificate. Click on the it to find the digital folder number and the image number--the key pieces of information needed to retrieve the certificate image. 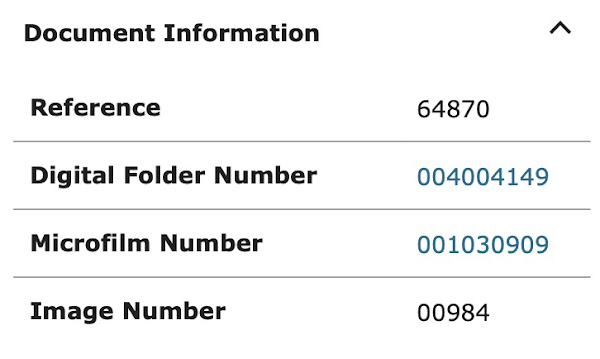 If you can visit a local family history center, an affiliate library, or the Family History Library in Salt Lake City, you will have an option to view and download the certificate. But, if you can't, the Family History Library Lookup Service is a great alternative. Simply fill out the form using information from the FamilySearch index page, submit, and watch your email inbox for a digital copy of the record.

Everything you need to know about using the service is available on the page linked above, but, in a nutshell, you can request up to ten records per week and experience tells me the images usually arrive in a few days, but sometimes it takes longer. All of the early Cook County vital records that appear in the indexes should be available, but it's possible some of the later ones might not be. (If a record can't be shared, the volunteers will let you know.)

Some years ago, I acquired photocopies of pages 1, 2, 4, and 6 (last page) of a type-set list of creditors of The Equitable Insurance Company. The document was created in conjunction with bankruptcy proceedings handled by the District Court of the United States, Northern District of Illinois, and the original (probably one of many copies) is held by the Minnesota Historical Society with the James A. Smith Papers, 1828-1893. I suspect the same documents would also be available from the National Archives at Chicago, perhaps with additional information. I just sent an email to ask.
The first page of the creditors list reads:
"TO YOU, one of the Creditors of said The Equitable Insurance Company, Bankrupt:
THIS IS TO GIVE YOU NOTICE:
1st. That a Warrant in Bankruptcy has been issued against the estate of The Equitable Insurance Company, Bankrupt aforesaid.
2d. That the payment of any debts, and the delivery of any property belonging to said Bankrupt, to it or to its use, and the transfer of any property by it, are forbidden by law.
3d. That a meeting of the Creditors of the debtor, to prove their debts, and choose one or more Assignees of the estate, will be held at a Court of Bankruptcy, to be holden at Chicago, in said District, on the 29th day of March, A. D. 1872, at 11 o'clock A.M., at the office of H. N. Hibbard, Esq., one of the Registers in bankruptcy of said Court.
And the following are the names of the Creditors of said Bankrupt, and the amount of their debts as given to me by it:"
A non-alphabetical list of 800+ individuals and companies follows--"Names of Creditors Residing in Chicago." Next to each entry is an amount ranging ranging from a few dollars to five thousand dollars. There are five columns of names per page, arranged like this:
Smeal Rebanks & co      2000
Hermann Bauer                600
Colby & Wirts                1500
R L Gowen                     2500
Alice C Thomas             1000
I could be very wrong, but I believe this is probably a list of those who filed claims with the insurance company after the Great Chicago Fire of October 1871. Seen in that light, the list
1) connects the named individuals to Chicago in 1871
2) provides the names of some individuals and businesses who probably lost property in the fire
3) suggests the extent of the loss by those insured by this company (which may or may not be the full extent since some were insured by more than one company; James A. Smith, for example, also appears on a fifteen-page list of The Chicago Firemens Insurance Company creditors which is also available from the Minnesota Historical Society)
4) offers a glimpse into the time needed to recover from the disaster (the hearing was in March of 1872)
5) hints at the unexpected burdens created by the fire (preparing the document might have challenged typesetters' resources; names begin to appear with  lowercase and small uppercase letters near the end)
6) includes female names which may or may not appear in city directories
I have typed and alphabetized the entries on this document. The list has limitations:
1) it does not include pages 3 and 5
2) there may be misspellings either in the document or from my typing
3) I have not proofread the transcription carefully
But, that said, if you find match with names from your own research, the list may prove interesting or useful. If you would like the dollar amount next to an individual or company, email me the name and code (info at chicagogenealogy dot com) and I will reply with the information.
Surname or business name | Given names or additional information | Code
at October 08, 2021 No comments: