Okay. I'll be honest. The Springfield Family History Expo memory that will stay with me the longest--maybe forever--was my encounter with the warm pecan buns that were available as the final stop on the breakfast buffet that I splurged on the morning of the second day. They were delicious beyond words and I ended up eating four of them. (They were small. Really.)

After breakfast, I headed to the patio on the 14th floor, played a few fiddle tunes to relax and start the day off right, and then I headed to class.

First up, "Tracing American Ancestors Who Lived in Cities," a double-session workshop taught by Arlene H. Eakle, Ph.D. She shared many wise insights but here are three of my favorites:
As a side note, Arlene uses an overhead projector and carries her transparencies around in notebooks. It's refreshingly old-school and it gives her lectures breathing room and flexibility. I liked it.

After a short lunch break, I sat in on James L. Tanner's "A Review of Major Genealogical Libraries and Repositories." The take-away from that? Two websites--archive.org and loc.gov. I was aware of both, but hadn't really explored either in much depth. But, what's a lazy Sunday afternoon for if it isn't for that?

archive.org
Census records to 1930 are there, free, in an easy-to-browse format. And, of course, there are thousands of scanned books of interest to family history researchers.

I'm fascinated by the media section, though. t took a bit of digging through some modern uploads, but I stumbled on a number of Chicago-related movies. If you missed Chicago's 1933 Century of Progress Exposition, it's not too late to take a tour (no sound). Or maybe you just discovered that your ancestor was a sign monkey. A what? Check out this informative movie about Chicago's Chevrolet sign. (I wonder what happened to it? Anyone know?) And where could a family turn for a small depression-era loan? Check out Financing the American Family.

loc.gov
You'll want to explore this site in some detail, but this morning I followed up on the class suggestion to look at the Historic Newspaper section.  I typed in "valentine smith" with "chicago" (Valentine, the subject of one of my long-term research projects, worked tirelessly to promote and preserve Chicago's history during the early 1900s) and got two results. 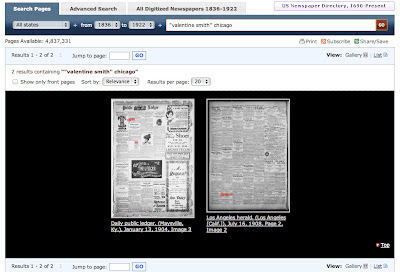 The one from Maysville, Kentucky caught my eye--I've visited there for research--and so I clicked through. 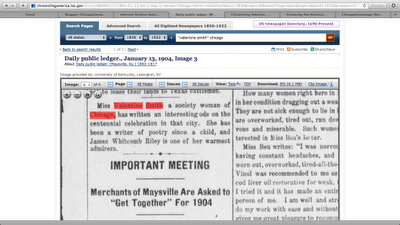 I have long sensed that Valentine was a "society woman" but it was nice to see that someone else viewed her that way, too. I knew that she was involved in Chicago's centennial celebration, but I didn't realize, specifically, that she'd written a poem for it and I had no idea that writing had been a passion for her since childhood. If James Whitcomb Riley was an "admirer," how did he become acquainted with her work? Did their lives cross paths? Did she publish any of her writing? And why would a Maysville paper mention Valentine and James? Research-wise, I'm off and running again.

My final class of the day was Jennifer Holik's "Branching Out: Teaching a Youth Workshop" presentation. She's recently published a series of books called Branching Out and she shared tips for introducing children to family history research. Jennifer will be teaching workshops for the younger generation at the upcoming Illinois State Genealogical Society Fall Conference in Rockford. Check them out.


The conference wrapped up with a closing keynote titled "Holly Shares Her Personal Research Magic and Awards the Grand Prize  Drawings" by Holly T. Hansen, president of Family History Expos, Inc. Her story highlighted the magic that she's seen in her own personal research quests and I suspect most people in the room were thinking what I was thinking: "Yes. Exactly." We've all experienced that magic.

But, what do they say? 99% perspiration and 1% inspiration. I don't really like that saying and you'd never find me saying it but I think it applies here. Much of the magic happens when we put the time in to learn the resources, create a plan, and  follow through without giving up. I came home with a number of new ideas for research and the motivation to follow through on them. Magic has already sprung from that.

Thanks to the Family History Expo folks for putting together a worthwhile (and delicious) weekend.
at August 05, 2012 1 comment:

Long day. I caught a 6:35 a.m. Metra train into Chicago’s Union Station, took  Amtrak’s 8:15 a.m. Saluki to Champaign, and rode the rest of the way to Springfield by bus. I arrived at the Illinois Family History Expo in time for the 2:00 p.m. opening keynote and spent the rest of the afternoon and evening attending conference sessions. The last class finished about 8:40 p.m. which left me some time to take my fiddle up to the 14th floor garden patio to practice and now I’m back in my room, ready to share a few of the many things that I learned that might be of use to Chicago researchers.
The opening keynote was a talk by Bernard E. Gracy, Jr. titled “Ancestral Echos” and a quick summary might go something like this: the times and places and events associated with the lives of our ancestors echo down through the generations. Our family history becomes richer and more understandable when we learn to identify those echoes.
As I’ve mentioned before, my husband’s ggg-grandfather, James Ayer Smith, traveled from upstate New York to Chicago in 1835 to establish himself as a manufacturing hatter, an occupation that would sustain his extended family for the next 40 years. There were setbacks and there were successes and family stories lead me to believe that his descendants were proud of his courage and his accomplishments.
I have to wonder if his example didn’t echo strongly in his granddaughter’s decision to run her husband’s business after his untimely death? And I wonder what role it played in her grandson’s decision to start his own business? I know that both my husband and I looked to him for inspiration as we made a decision to launch our own entrepreneurial endeavor.
So you have Chicago ancestors? What echoes from their lives have come down through the generations? Where did they come from? When did they arrive? Where did they live? Who were there neighbors? Did they move around the city or stay in one place? What were their communities like? Did they associate with any religious congregations? What about the schools they went to? Did they belong to any clubs? What did they do for recreation? The more you are able to place their lives in context, the better chance you'll have of identifying the echoes. Reading through early issues of the Chicago Tribune online is a very enjoyable way to see the city through the eyes of its former inhabitants.
The first two classes I attended were given by Arlene H. Eakle, Ph.D. One was titled “What is “The South,” and Why is it Such a Genealogy Research Challenge” and the other was titled “Want Land Will Travel: Land and Property Records in the Southern US--State-by-State.” I have no experience researching in southern states and I thought it would be both useful and enjoyable to learn something new. It was.
Most of the information was state and region specific but I came away with one tip that is universal. Put in terms of Chicago research, if you’re reading a book related to family history in Cook County, check out the sources listed and follow up. You might discover a new-to-you resource that would be of help in your research.
Another tip. Record loss is a stumbling block for southern research and a similar challenge exists for Chicago research because of the 1871 fire. Just because one record was destroyed doesn’t mean there isn’t an alternate source for the information. Look around and think creatively. You might be surprised at what you find.
The next class I went to was James L. Tanner’s “Ancestry.com for Experienced Users.” The take-away from that? Use the website’s card catalog to select specific databases to search. Try it. Type in “chicago” and look at the list that comes up. Narrow it by using the filters. “Chicago Irish Families, 1875-1925” is a valuable database for Chicago research but you might not find it doing a global search. Also check out Reminiscences of early Chicago and vicinity. It’s fun to read and it’s a useful way to gain insights into the lives of early Chicagoans.
The last class I attended was Jennifer Holik’s “Visualizing Your Genealogical Data.” Jennifer is a Chicago researcher and her talk on using Excel, OneNote, maps, and blogs to identify information gaps and craft focused research questions was sprinked with examples from her own Cook County research.
Here’s a tip I think you’ll like: if the streets your ancestors lived on no longer exist (maybe they’ve been replaced by a university or a shopping center) use historical maps to help in your search. Jennifer mentioned one in particular--Tillotson’s--and I’ve pulled up a 1910 version online for you. Check it out!
And so, a long day comes to an end. Four classes tomorrow and two of them will focus on research in cities. Certainly there will be something valuable for Chicago researchers there.