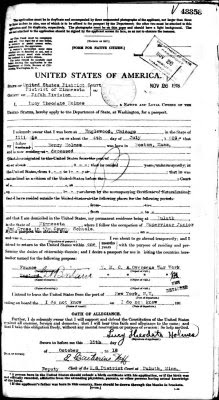 One of the challenges in doing research in Chicago and Cook County is that many early births weren’t reported to the county clerk’s office. In other words, many people born in the late 1800s and early 1900s in Chicago didn’t have a birth certificate.

Baptismal records are usually a first-choice option for proving a birth date when no birth certificate can be found, but United States passport applications are another good source of birth information. They can be found on Family History Library microfilm, but they have also been available for some time on Ancestry.com.

Here’s an example from my own research of how helpful they can be.

For a number of years I have been gathering information about the family of H. H. Holmes, one of the the subjects of Erik Larson’s best-selling book The Devil in the White City. Holmes and his wife Myrta Z. Belknap had a daughter named Lucy and I was interested in finding a birth record for her. I started the search based on a couple of sentences from Larson’s book:

In the summer of 1888 her parents [Lucy’s mother’s parents] moved to Wilmette, Illinois, where they occupied a pretty two-story house on John Street, opposite a church. Lonely, sad, and pregnant, Myrta [Lucy’s mother] joined them at the house and there bore a daughter, Lucy. (p. 65)

Then I read in the program syllabus from the 2006 National Genealogical Society Conference (in Patricia O'Brien Shawker's "Passport Applications: Introduction and Background") that passport applications sometimes include birth dates and that passports were required for travel at the end of World War I. I knew that Lucy had been in Europe about that time. I ordered the appropriate microfilm through my local Family History Center and found the application for the passport she obtained to travel to Europe in 1918 for “Y.M.C.A. Overseas War Work.” 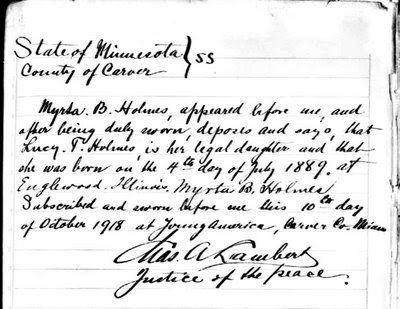 It was quite a find. From the application I learned that Lucy was born “on or about the 4th day of July, 1889” and this was supported by an affidavit from her mother, Myrta B. Holmes. I finally knew when she was born.

I also learned that her middle initial “T” stood for Theodate which meant that she was named after her maternal and paternal grandmothers, Lucy Thyrza Beers and Theodate Page Price. This was particularly interesting to me. Did it mean that Myrta knew something of H. H. Holmes’ parents, and if so, did she know them as “Holmes” or did she realize that her husband had been born “Herman Webster Mudgett?” Or did it mean that Holmes, without explanation, had suggested Theodate, his mother’s name, as a middle name for his daughter?

And I discovered (I have no reason to suspect that the information on the passport application is false) that Lucy was born in Englewood, Illinois, and not in Wilmette as I had previously thought. (An Englewood birth, by the way, would still have a Cook County birth certificate and so I still do not believe that her birth was reported.)

In this case the place of birth was significant. If Lucy was born in Englewood, she might have been born in the apartment above the drug store that Holmes ran. Holmes castle, according to The Devil in the White City, was only half completed in the summer of 1889 and Holmes didn’t move into the building until the following year. (p. 71) And if Lucy was born in Englewood, it seems reasonable to assume that Holmes attended the birth. This opens up all sorts of questions about the relationship between Myrta and her husband. Did Myrta go to Englewood just before Lucy’s birth or did she, perhaps, move back with Holmes before Lucy was born after spending time in Wilmette with her parents? (Holmes eventually built a duplex in Wilmette and Myrta and Lucy lived on one side and Myrta’s parents lived on the other.). And, if Holmes attended the birth, was he the only one there? Or would Myrta’s mother have perhaps been there, too? What was it about the relationship between Myrta and Holmes that allowed her to survive unlike many of the other women he was attracted to? 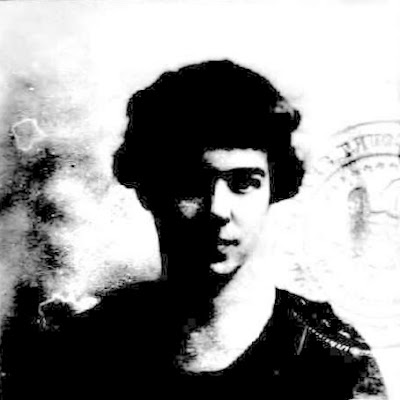 These questions fascinate me and I hope, one day, to find some answers, but back to the topic at hand. The important point here is this: If you’re looking for evidence of a birth in Chicago and haven’t had any luck finding a birth certificate, consider taking a look at passport applications. You might find yourself well-rewarded. In this case, I not only found a birth date and place, but the passport application included a photograph of Lucy in her late twenties. I was finally able to “meet” the person that, through other research, I had come to know so well.