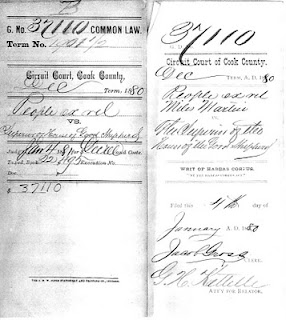 A blog reader noticed an entry in the Chicago Daily Law Bulletin image I included in a previous post that referred to "People ex rel v Superior of House of the Good Shepherd" and wondered about the details of the case. I decided to follow up and obtained a copy of the file.

It seems a writ of habeas corpus was filed by a man named Miles Martin on behalf of a child named Sylvia Lear who was living at House of the Good Shepherd as Minnie Bell Pursell. According to the document, "Sylvia was some years ago stolen from her mother and the parties who took her have since died and the child falling into other hands, at last was placed in said House of the Good Shepherd to avoid the care and Expense of providing for such child."

The petition continued: "...the mother of said Sylvia after diligent Search and Enquiry for her child she having the only lawful right and custody to the care Custody and Education of said child, at last found out, that her said daughter was confined in said House of the Good Shepherd and that she demanded her said child of the Mother Superior of said Institution and was refused as well that she might see [her?] child at all."

The judge wrote "Let the writ of habeas corpus issue pursuant to prayer of within petition." It was dated Jan. 3, 1880 but the year was actually 1881. 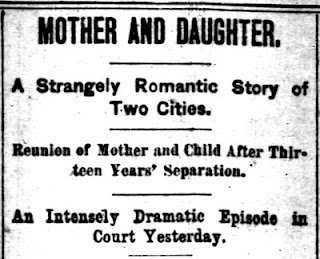 Then, I tried a search for "sylvia lear" in the Chicago Tribune at Footnote.com and found one match from 5 January 1881. I thought it would be a quick mention of the case in a legal column but the headline read "Mother and Daughter. A Strangely Romantic Story of Two Cities. Reunion of Mother and Child after Thirteen Years' Separation. An Intensely Dramatic Episode in Court Yesterday."

The lengthy report details the story of a young Peoria Christmas bride waiting for a groom who never came. Seven months later, July of 1868, she gave birth to a "female child" who was named Sylvia Lear and given to her married sister to raise. Four years later the young bride learned from her dying sister that the child had been left at a hotel in Peoria because her husband was unwilling to provide support. The baby was given to a woman named Ellen Kirby, who married Sanders, and later married Purcell. Mr. Purcell died. Mrs. Purcell died, and Sylvia ended up at House of the Good Shepherd. The story includes many more details than I have summarized her and it's worth taking the time to read it. Article Image

Sylvia's mother's name isn't mentioned beyond "Carrie" and "Mrs. W" in order to protect her privacy and, for the moment anyway, I think I will respect that. Still, I wonder what became of Sylvia Lear?
at November 30, 2010 1 comment: