The Chicago Fire: Was Your Ancestor Insured? 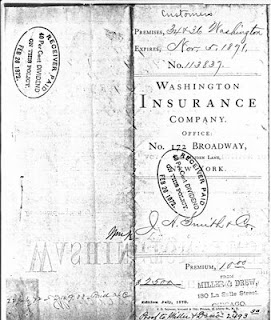 My husband's ancestor, James Ayer Smith, arrived in Chicago in the spring of 1835 with plans to open a hat and cap store, and in August of that year, his father sent him a letter with some very detailed advice on how to succeed.

In closing, he wrote, "There has been a heavy fire at Cleveland & I hope you will not fail to have insurance made on your stock immediately to the full amount Your affectionate Father Chas. Smith." James appears to have taken that advice.

When he lost business property in a fire in 1857, he received a $3000 settlement, with payments shared by six insurance companies. And in 1871, when The Chicago Fire hit, he was once again well insured. For example, James A. Smith & Co. had a policy from Washington Insurance Company purchased in August, 1871 in force through November of the same year "against loss or damage by fire ... on Furs manufactured or unmanufactured, also on Wearing Apparel manufactured in whole or in part of Furs or manufactured entirely of any other materials, Fur and Buffalo Robes and Lap Blankets left with them for safe keeping and for the deliver of which to the owners, they have made themselves responsible, loss or no loss, contained in the fourth story of the four story brick building with stone front known as Nos 34 and 36 Washington Street Chicago Illn." The policy was sold by Miller & Drew on La Salle in Chicago and the $10.00 premium provided $2500.00 worth of coverage. 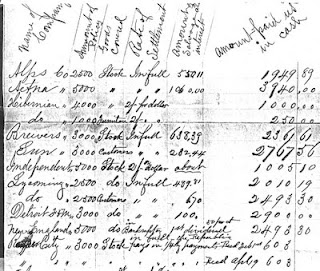 Based on a list of policies held, goods covered, and settlement amounts, James appears to have had at least twenty-eight policies in effect at the time of the fire. But what about your ancestor? Was he or she insured?

Because extensive damage meant an unusually high number of claims, many insurance companies filed for bankruptcy and court documents related to these proceedings include lists of creditors--people with claims.

For example, creditors of The Republic Insurance Company of Chicago, Illinois listed in papers published by the District Court included the following:

And the list goes on--three pages, four columns each, with tiny type. And that's just one insurance company. There are similar documents for many other companies included in the James A. Smith papers.

Unfortunately, the names on the lists aren't alphabetical. It would take some time to search for a particular name, and if the name was common, "Patrick Murphy," for example, it would be hard to determine whether or not the person listed was actually an ancestor. But if you are researching a unique name, it might be worth taking a look. 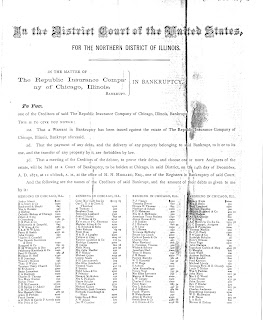 Gleanings from "Legal Friend of the People"

In January, 1911, the Chicago Daily Tribune began publishing a column called “Legal Friend of the People.” Readers wrote in to ask questions about legal matters and topics ranged from what to do about a neighbor’s bothersome ducks to marriage, probate, and citizenship. For genealogists, this column is a rich source of information about the laws of the times.

Below are some examples of the kinds of things I've learned from the Legal Friend. (I have access to the Chicago Tribune Historical Archives online--the source of the columns mentioned below--using my Chicago Public Library card.)

11 Mar 1912, p. 8: Illinois law states that a divorced person must wait one year before remarrying; in questionable cases, couple should be remarried

11 Mar 1912, p. 8: Common law wife has same rights as any other wife, but definition of common law wife is strict; best to have legal marriage performed

28 Mar 1912, p. 10: Nevada laws permit remarriage within months of a divorce; marriage there under those circumstances would be considered legal in all other states.

1 Apr 1912, p. 10: Nieces and nephews would inherit if unmarried uncle dies with no living parents or siblings

8 Apr 1912: Legal name change can be done through Circuit Court for about $15; Slight change in spelling wouldn’t require legal proceedings

12 Apr 1912: Aliens who have served in the United States military can receive citizenship with petition (no previous declaration of intent) and have only to prove a one-year residence

15 Apr 1912, p. 10: Wife desertion punishable by a fine or imprisonment; husband cannot be brought back from another state

29 Apr 1912, p. 10: If a man marries under an assumed name, he should obtain another license in his real name and be married again

6 May 1912, p. 4: Statute prohibiting marriage in Illinois during the first year after divorce went into effect 1 Jul 1905

27 Nov 1916, p. 8: Minister visiting from another state can marry an individual who has obtained a Cook County marriage license

22 Oct 1917: Man married in Florida, wife left him in England, and he is back in the United States; he would have to get a divorce before remarrying here

17 Dec 1917: Law making it illegal for divorced persons to marry until a year had passed went into effect 1 Jul 1905

31 Dec 1917: A marriage between persons who used assumed names to get license is legal, but the parties are subject to punishment; Crown Point marriages are not announced routinely in Chicago in a public way

30 March 1918: No “statutory limit” on when a marriage license has to be used

The Problem with "Only"

I'm not sure I'm the best one to point this out. After all, I earn extra income by looking up Chicago birth, marriage, and death records for researchers for a small fee. But, on the other hand, one of my goals is to educate researchers on which Chicago and Cook County records can be found where, and I think this falls under that umbrella. So, here goes . . .

I was just searching Ancestry.com, hoping to stumble on some information about a person I'm researching, and I ended up in the Cook County Death Index, 1908-1988. It's a handy resource, but I think one small tweak needs to be made to the results page.

When I rolled over the "Purchase from Cook County" link, the pop-up read "Indexes have been made available here at Ancestry, however, images and original certificates are only available through the Cook County Clerk's office" and the word "only" isn't quite right. Chicago and Cook County death records up through 1947 are available both in Springfield and on microfilm that can be viewed at or borrowed from the Family History Library in Salt Lake. And, in the Chicago area, they're available at the Wilmette Family History Center.

It's likely that the word "only" is there because it's much easier to phrase it that way than it is to try to explain that some records are available from a number of repositories while others are only available from the clerk's office, but it would be better to just leave the "only" out. Most people would just click through and purchase the records from www.cookcountygenealogy.com anyway.

I applaud Ancestry and the Cook County Clerk's Office, by the way, for teaming up to make this index and the corresponding records easily available to researchers. I really do. Sometimes people ask me, "Can you get records after 1947? and sometimes they mutter, just a tiny bit, when they find out that I can't, and that they will have to pay $15 for whatever they need. My reply? It costs money to preserve valuable records and to build applications like the new Cook County vital records website and $15 is money well spent if you need a record to keep your research moving forward.
at January 11, 2009 No comments: