Why Would the Recorder of Deeds have Death Records?

Back in November, I wrote about Sam Fink's Marriage and Death Indexes and I mentioned that some of the death index entries have volume and page numbers that refer to -- well, no one really seems to know.

And I also mentioned that there was a key to the years included in the index. 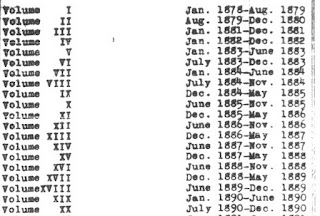 In a few weeks I'm going to make a trip to Van Buren County, Michigan with the hope of discovering the history of a particular property there. I was looking at  the frequently-asked questions on their website today and this paragraph caught my eye:

Q: My spouse passed away and our property is in both our names, what do I do?
A: Bring in a certified copy of the death certificate and we will record it.

If that's the case, it's possible that the volumes Mr. Fink was indexing include records for deaths that happened both in and out of Cook County.

A few months ago I asked, casually, about the existence of the books that Mr. Fink was looking at but I didn't get very far and I didn't pursue it. I think I'll have to ask again.