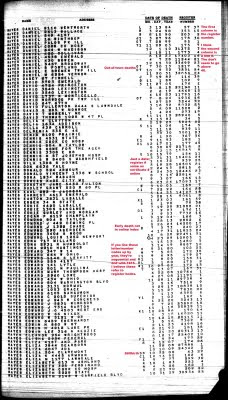 What should we call this index?

If you search the Family History Library Catalog at FamilySearch.org you will find a resource listed under “Illinois, Cook, Chicago - Vital records – Indexes” called "Indexes to deaths in the city of Chicago during the years 1871 to 1933 : showing name, address and date of death" created by the Chicago Board of Health. It’s a very long, descriptive title, but it’s somewhat misleading.

It’s true that most of the people listed in this index died in Chicago, but the index also includes people who died outside the city. And, in fact, a note in the catalog says, “These indexes are believed to be for burial permits, the actual deaths having occurred both in and outside the city of Chicago, often times out of state.” That’s probably why some researchers call it the “Burial Permit Index,” but that’s misleading, too. As far as I’ve been able to determine, the numbers given in the index don’t lead to burial permits; they lead to death certificates and/or death register entries.

For lack of a better title, I often refer to the index as the “Chicago Death Index, 1871-1933” (CDI) as a short way of distinguishing it from the Illinois Statewide Death Index online.

What makes this index useful?

I’ll list a few answers to this question and then illustrate the points with a case study from the lookups that I did today.

· The index includes deaths between 1871 and 1878 that aren’t in the online index. If you find an early entry here, you can be pretty sure that the county clerk’s office will be able to provide you with a transcription of the record if you send in a $15 request.

· The index lists place of death. If the death was in Chicago, you’ll see a street address. This can be very useful if you’re trying to figure out when someone with a common name died if you have a last-known address from a directory or census or other source. If the death was somewhere else, you’ll see a city and state. Sometimes people who are buried in Chicago aren’t in the online index because they died some place else—like Michigan. A quick check of the CDI can sometimes save a lot of time and frustration trying to pull an index entry out of the online index when it just isn’t there. Out-of-town death records for 1909-1915 are available on FHL microfilm. In most cases, though, I think it's best to try to get a copy of the original death record from the place where the person died.

· The index lists stillbirths for some years. (I haven’t focused on these entries and so I’m not able to provide additional information about what years are covered or how to find the corresponding records. There are some stillbirths listed with the Illinois Statewide Death Certificates, though.)

· Sometimes names are spelled differently in this index than they are in the online index.

· Sometimes a year is wrong in the online index. Cross-checking with this index can help you figure out where to look for the death record.

So what about the numbers in this index?

This index appears to provide register numbers. For deaths from 1916 forward, the register number is the same as the certificate number from the online index and you can use it to locate the actual record on FHL microfilm.

For deaths between 1878 and 1915 the register number is different from the certificate number and it can’t be used (directly) to find a death certificate on FHL microfilm. However, if a name is in the index, it’s very likely that there is a corresponding index entry in the online index and it’s worth digging for it using Stephen Morse’s One Step access if it doesn’t pop up immediately.

For deaths between 1908 and 1915, there is a small subset if FHL microfilms arranged by register number as well as an overlapping set arranged by certificate number. The numbers from the CDI can be used to find records on the register number films. (It’s not obvious from the FHLC which films these are; it’s best to use my key which is available on the Wilmette FHC website.)

So, how about a case study?

Today I was looking for three deaths from the 1890s, none of which seemed to appear in the online index. (I'm going to change the name to Smith but the details remain the same.)

Using Stephen Morse’s One Step site, I was able to find an index entry for Minnie. She was listed under “Winnie.”

I then found two possible matches for Lilly:

In the CDI, one of the two was listed with the same address of death as Minnie—most likely the record the client was searching for.

August was a bit more difficult.

The chances of two August[us] Smiths dying on the same day and month are small and so my guess is this is the person the client was searching for even though it was off by a year. (Hopefully the client will be able to tell based on address, occupation, birth place, length of time in Chicago, etc.)

I went back to the online index and was able to pull up the matching entry. It was listed under the initials G. F. but based on the address of death it was the match.

I might have stumbled on the index entry for G. F. if I had looked closely at death dates for every Smith who died between 1890 and 1892 (I often broaden the date range because sometimes dates are wrong) but the Chicago Death Index made the search much simpler.

Now the question is this: If the death certificate just has initials, where did the name listed in the CDI come from? If I figure it out one of these days, I’ll post!

gensearch said…
I have used Stephen Morse's One Step access and I received the following message:

"1 records were found.
0 of them satisfy the additional constraints and are shown below."

What does "0 of them satisfy the additional constraints and are shown below" mean?

No record was shown below.

Cyndy said…
When you get the 1 record found, 0 satisfy the additional constraints, then I think it means that the name was located but something like age or year of death didn't match what you were looking for.

One thing that happens to me--I'll look for "John Smith" 1930-1940 and get no results and think, "How odd!" Then I'll realize that I've left the form searching the records to 1915 and of course there are no matches!