December 16, 2010
It's quiet at the Wilmette Family History Center today and so I decided to explore the Chicago entries in the Family History Library catalog as a way of learning more about the new FamilySearch website.

One of the titles that caught my eye was Marriage and death records, 1861-1905 from Chicago's Sinai Congregation, Film 1013426, Item 16. The reel was available and so I decided to take a look.

The congregation's first service was held on 21 Jun 1861 and mention of it is made on the first page. The next page begins with January 1868 marriages and the entries seem to be numbered sequentially beginning with #91 and ending with #528. Following those entries there's a page that begins with marriage #1 from July 1861 (see the image) and the numbers then climb to #90. This means that there are approximately 150 pre-Fire marriages recorded in the book. It's a treasure of value to all of us but especially to those who have ancestors' names recorded there.

The register entries include the names of the bride and groom, the marriage date, and the marriage date according to the Jewish calendar. A few entries have additional information. For example, one mentions that the bride was from Valparaiso, Indiana and at least two others note that one of the parties was born Christian. Some previous civil marriages are also mentioned. The death entries seem few and hard to find but the one I saw provided the name of the deceased and a death date. 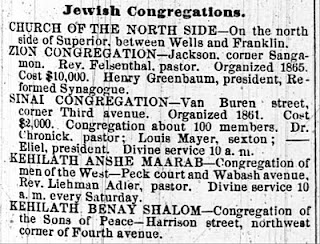 After looking through the book, I wanted to know a little bit more about the congregation and so I checked the 1870 Edward's Chicago City Directory (p. 931). At that time the Sinai Congregation was listed at "Van Buren street, corner Third avenue," one of five Jewish congregations in the city, and it had about 100 members.

The Chicago Sinai Congregation will celebrate its 150th anniversary in 2011. For more information about the congregation's history, visit their website.

The film says the original marriage and death book is held by the Jewish Archives in Cincinnati, Ohio.