January 25, 2012
If you look at the Illinois, Cook County Birth Registers, 1871-1915 on FamilySearch, you'll notice that some entries read "W. P. A." Members of the Chicago Genealogy Facebook group were pondering those entries last night and I realized that my thoughts on the subject were too lengthy for a Facebook post so I'll share them here.

First things first. What are the birth registers and how were they created? The short answer is that I don't know for sure. But, I have a guess that pertains to the books that were organized into alphabetical sections by month and year. (The earliest books are arranged differently.) Many early births went unrecorded, but when a record was created, I believe a doctor or midwife, or another person who attended the birth, filled out a birth certificate form and returned it to the county clerk's office.

At that point, I think the county copied the information from the birth certificate into a birth register and assigned a certificate number based on the line number for the entry. The registers would have provided a systematic way for assigning certificate numbers while serving as a detailed, chronological index to the actual records.

Let's look at an example page from a register that shows W.P.A. entries. Notice that the last six entries are in different handwriting. What's unique about them?


Register: Acerra (regular writing)
Certificate: 608 Maria Acerra, record not dated
Comment: This was probably the last entry made in March of 1913

Register: Altiger (dark pen)
Certificate: 609 Edward Atiger, record dated March 29, 1927
Comment: This certificate was signed by a doctor many years after the birth

Register: Taken WPA
Certificate: 612 Zosfia Andzejewska, no date (regular form)
Comment: This certificate appears to be from 1913 but the certificate number has been changed

Register: Taken WPA
Certificate: 613 John Adams, record dated March 30, 1914 (regular form)
Comment: This certificate was signed by a doctor in 1914 and the certificate number has been changed

The two W. P. A. entries come after births reported in the 1920s and before a birth reported in 1941. The Works Progress Administration was active in the 1930s and I think it's safe to assume that these entries were made by W. P. A workers.

So, why were the entries made? Notice that the two W. P. A. certificates had at least one thing in common. The certificate number was changed. It's possible that the workers were moving misfiled records.

The certificate numbers that were changed were low, as I'd expect for an "A" birth early in the year, so I decided to check the birth register for March of 1914 to see if I could find an entry for John Adams. It was there on line 458, just as I'd hoped. It looks like his certificate was originally recorded in the 1914 register and assigned a certificate number from there but that's misleading because he was really born in 1913. I think the W. P. A. workers were correcting that error and I think it's likely a bit of detective work would also locate a register entry for Zosfia Andzejewska.


The curious thing to me is that the W. P. A. didn't record the names in the registers when they fixed errors and that they didn't make notations by the original register entries to document the certificate number changes. If I had located the birth register entry for John Adams in 1914 and used the year and line number there to search for his birth certificate on microfilm, I would have come up empty-handed.

Two things come to mind as I bring this post to a close.

1) Thing aren't always as they would seem. Looking at the birth register entry for John Adams, it would make no sense to say that he was born in 1913, and yet ... Notice, though, that the register probably isn't a primary source.

2) I am grateful for the efforts of the countless individuals who have volunteered indexing time to make Chicago records accessible through FamilySearch. 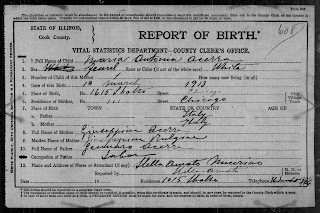 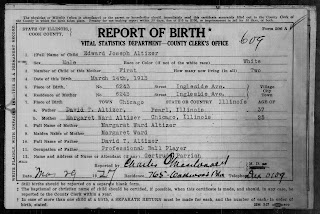 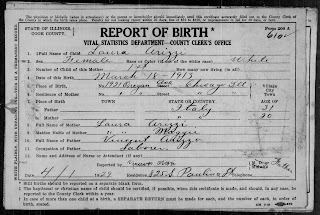 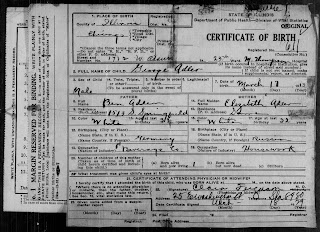 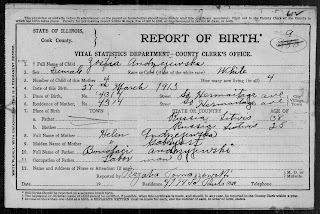 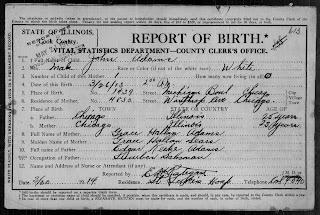 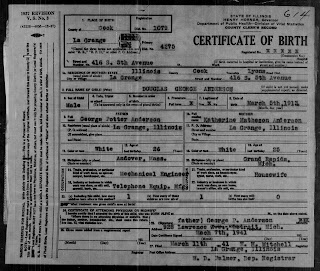 Jacqi Stevens said…
Excellent point and explanation. Thanks for taking the time to check all that out!
10:50 AM