March 26, 2012
Recently I corresponded with a researcher who had come up with a creative approach to answering a family history question. She just needed someone in Chicago to carry out her plan. I said, "Sure. I'll give it a try if it's okay with you if I blog about it." She said it was.

What she knew:
Her questions:
The researcher had learned that Holy Family Parish School Tuition Records, 1865-1879 were available at the Loyola University Archives and Special Collections and she thought that at least one of the family's children would have been enrolled. Her hope was that the tuition records could help her zero in on when the family left Chicago.

I called the Archives and made an appointment to visit. (Hours and FAQs) It was an easy trip on the Red Line. I got off at the Loyola stop, crossed the street to campus, and walked toward the lake. The sidewalk wound between a number of buildings and easily led to the Cudahy Library. I showed identification, signed in, and made my way to the archives room where I was met by an associate archivist. She was friendly and welcoming and went out of her way to help me access the records I was there to use.

The Holy Family Parish School Tuition Records were kept in large bound ledgers and although the bindings were somewhat fragile, the pages were sturdy and easy to use.


The books are divided into sections by first letter of surname, but entries are chronological, not alphabetical. As I read through each year looking for the researcher's family names, I noticed that many children returned year after year and children from the same family were usually entered together. These records could be used to track a family's address. The could also be used to approximate the birth dates of children in a family.

I'll include two example images below so that you can get a feel for what the records are like. 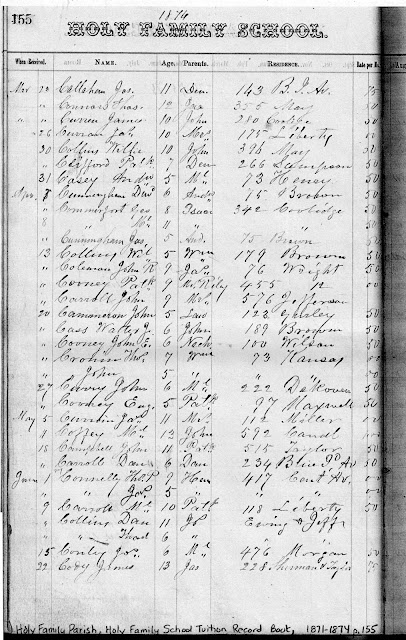 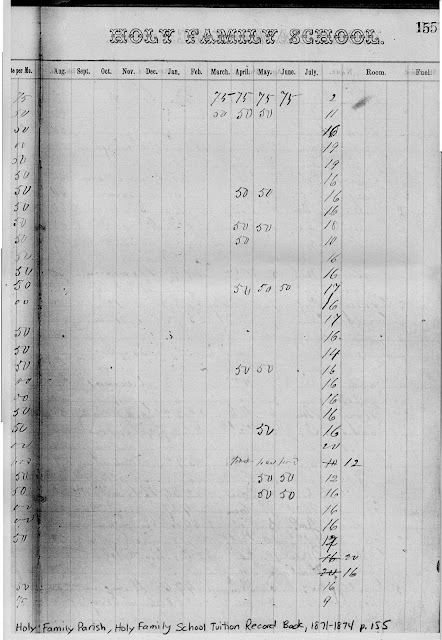 So, was the search of use to the researcher? I think so. I was able to find one entry listing two of the family's children and from it the researcher learned that the family was still in Chicago in 1874, living at a previously-unknown address. The children were received in April but they paid no tuition, so it wasn't possible to determine when they might have left the school.

I really liked the researcher's resourcefulness in trying to answer a hard-to-answer question. If you know of any other off-the-radar Chicago records that could be used in similar ways, please post a comment and share.

A kind reader shared a link to a Finding Aid for Holy Family Records. Follow the link to learn about the records that are available at the Archives.

Jacqi Stevens said…
Cynthia, this is a particularly timely post for me. Right now in my own blog, I'm researching priests from a specific parish in south Chicago (St. Anne's) who have corresponded with my husband's grandmother and great-grandmother. I have letters saved from the 1870s onward.

While genealogy is normally reserved for study of family lines--and by definition, celibate priests would not have any children to research them--I feel so strongly about recognizing these priests and reconstructing their bios. Your post opened my eyes to using alternate, church-based resources to rediscover the story of these people's lives.
3:57 PM

Julie said…
Thanks for sharing. I have family associated with that church, so I may have to look into this a bit further. Do you happen to know if the tuition records go beyond 1879?
5:32 PM

Cyndy said…
I don't know the dates on the tuition records, but I'm sure they could tell you if you called. C
11:42 AM

Unknown said…
Here's a link to Loyola's finding aid. I went to add the info to ChicagoAncestors, but it was already there in a comment. Finding Aid
11:17 AM

Cyndy said…
Thanks for the Finding Aid link. I'll add it to the post to make it easy for readers to find it.
7:40 PM

Pat Spears said…
Another great source for Holy Family information is Brother Thomas Mulkerins' book Holy Family Parish. There is a list of contributors to the 1865 altar fundraiser where I have found some ancestors.
https://archive.org/details/holyfamilyparish00mulk
(p. 59)
6:37 PM