Why Does the FamilySearch Death Index Have Duplicate Entries?

February 07, 2014
Have you noticed that some people are listed twice in FamilySearch's Illinois, Cook County Deaths, 1878-1922 index, sometimes with slightly different information or spellings? Have you ever wondered why? Have you ever wondered which record to go after? Or whether you should go after them both? In this post, I'll tell you what I know about the duplicate entries and the corresponding death records.

If you search the two film numbers in the Family History Library Catalog, you'll see that they're from the same series: Chicago Death Certificates, 1878-1915.

From 1908-1915, many individuals who died in Chicago will have two death certificates on two different films from this series.

The record from the first entry can be found on a film using a register number that can also be found on a microfilm index called Index to Deaths in the City of Chicago During the Years 1871 to 1933: Showing Name, Address and Date of Death. These numbers appear to group the records together by the date they were recorded. Surnames beginning with all letters of the alphabet are mixed together. I'll call this the "register number record" or RNR.

The record for the second entry can be found on a film using a certificate number that's also available from the Illinois Statewide Death Index. These records are organized by the certificate number on the films and the numbers group them together by month by the first letter of the surname. In other words, all of the "K" records for March, 1909 would be a sequential group. I'm going to call this the "certificate number records" or CNR.

So, what's the difference between the two records? Let's look at the CNR for Charlotte first. Notice that it's written in two hands. The top was probably filled in by the undertaker and the bottom was likely filled in by the physician. 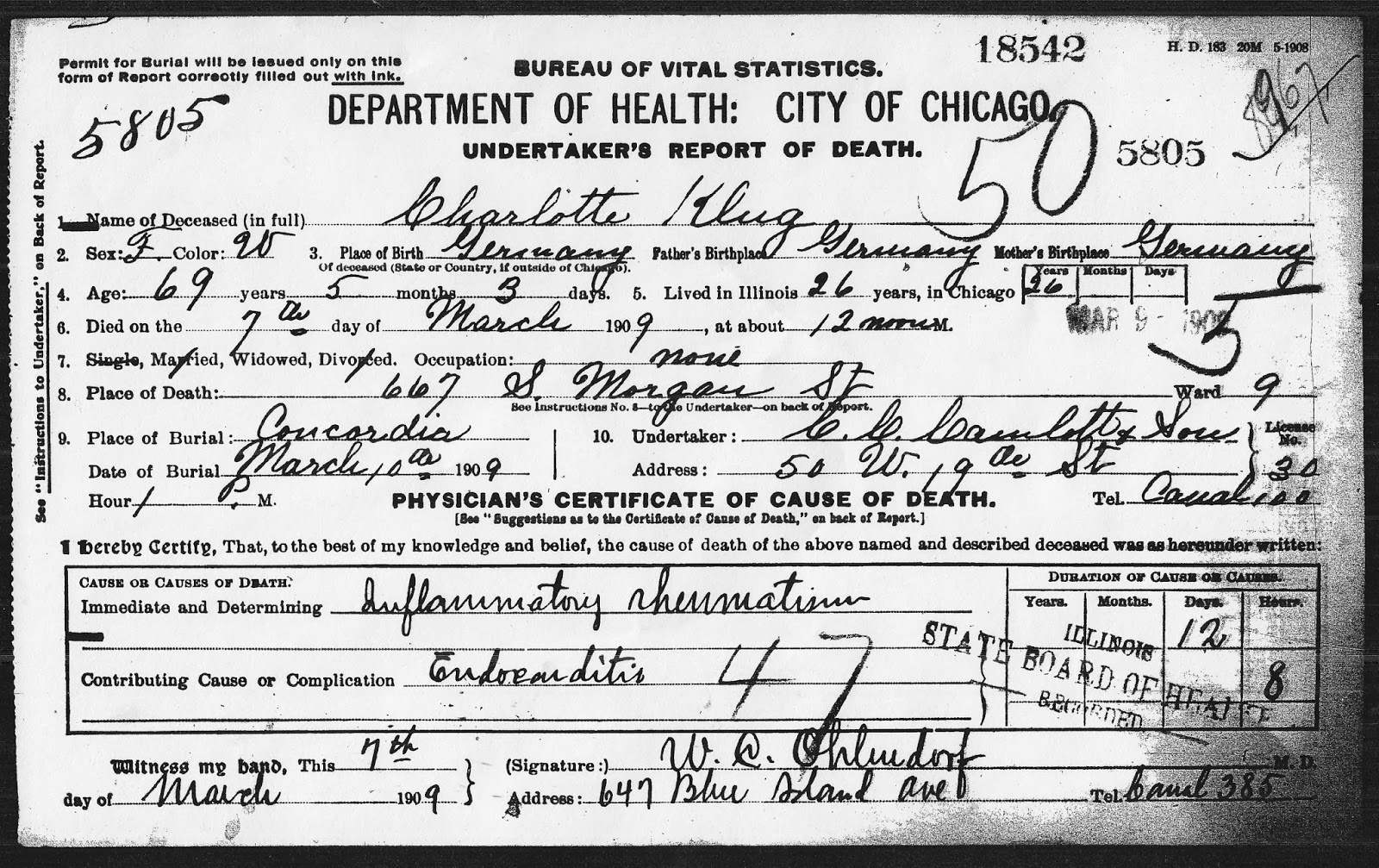 Now look at the RNC. The handwriting, including the signatures, is all the same. 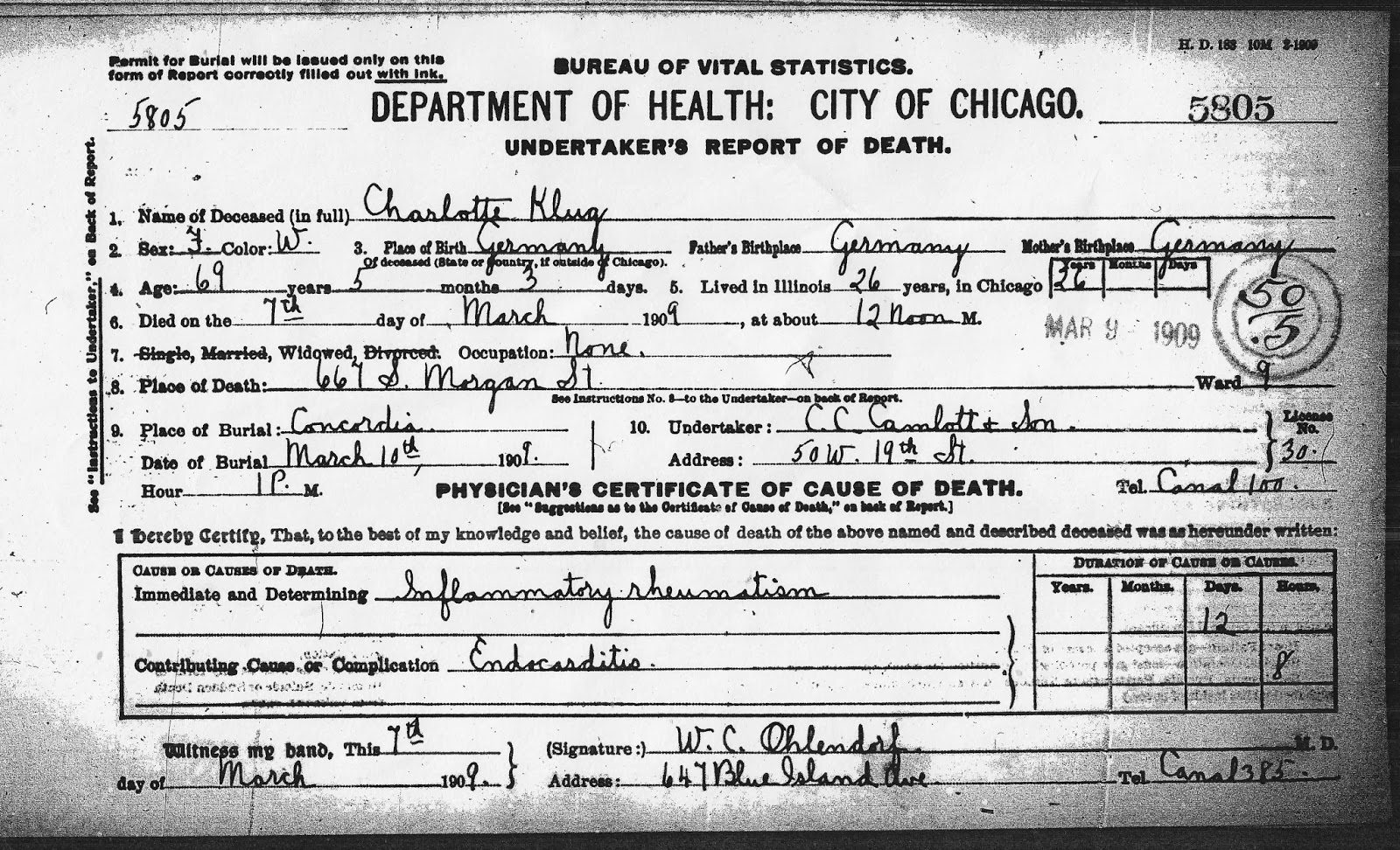 I believe the CNR is the original record and I think the RNR is probably a copy made by someone at the Cook County Clerk's Office.

So, how did the recording process work? I don't know for sure, but I can guess, based on what I know about other Cook County Clerk's Office records.

In this case, I think the CNR was filled out by the undertaker, physician, and/or coroner, and returned to the  County Clerk's Office. Then I think a copy was made by hand on a blank form and I think both were assigned a register number based on the order that the original was received and entered.

The copies were kept in register order number and eventually the originals were grouped by the first letter of the surname within the month and assigned certificate numbers. There's a third number stamped on top of the original records, but I don't know what the significance of it is.

I've compared duplicate records from other years, but I haven't done a systematic study. In some years, the two records look the same at quick glance but there are usually very subtle differences in the writing. In those cases, I think the undertaker and physician created two record at the same time and submitted both to the clerk's office.

So, which record should you search for if you find duplicate entries in the index? I think it's best to search for the CNR -- the one that seems to be the original.

If you live in the Chicago area, the Wilmette Family History Center has all of the CNR films and many of the RNR films. If you don't, you can access the reels at the Family History Library in Salt Lake City, order in the film at your local Family History Center, or just ask me to retrieve the record. I charge $6/search and if the local FHC has both reels, I'm happy to provide copies of both records for the same fee. I also offer small discounts for 3 or more requests submitted at the same time.