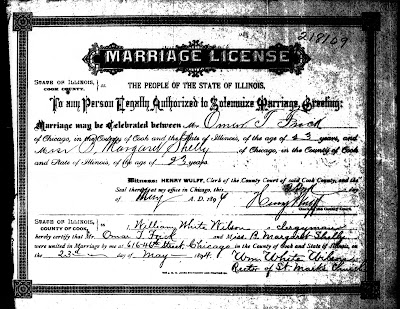 I'm an administrator for an active Chicago Genealogy Facebook group and with so many indexes for records online now, one question that's asked over and over is, "How can I get [fill in the name of a record type here]."

Recently, someone asked about a marriage license from 1891 and my first thought was that the record could be obtained from FamilySearch microfilm at the Wilmette Illinois Family History Center or the Family History Library in Salt Lake City. It's less expensive than getting records directly from the county, and if a researcher can't go in person, there are plenty of local researchers who offer document retrieval services at those places for a reasonable fee.

But then I remembered there's another great option for getting early Cook County marriage licenses that is likely often overlooked--the Illinois Regional Archives Depository at Northeastern Illinois University, better known as IRAD at NEIU.

Their holdings include Cook County marriage licenses, 1871-1915, and here's the good news! They will take requests by mail or phone. When I last used their service, the only cost was to reimburse them for copying which meant sending back a check for $1.00 after I received the record.

Search the Local Government Records Database to learn about what else they have to offer. Selecting "Cook" for the county and hitting "Submit" will show you all of the database entries for NEIU.

Here are some not-to-be missed records from their collection:

Birth certificates, 1878-1894 and birth records, 1871-1915. Note the "outside the city of Chicago part," because that's really important. IRAD holds the county records--say, if an ancestor was born in Evanston--but they don't have the Chicago city records.

So, how do you know if the record you want is county--meaning IRAD will likely have it?

First off, if the index entry mentions Chicago, it's very likely it's a city record.

If it doesn't, it's time to do a bit of detective work.

Find the film number mentioned in the index entry and search it in the Family History Library Catalog. If the result says "Cook County Birth Certificates, 1878-1894" or "Cook County Birth Registers, 1871-1915," it's likely IRAD will have the record. If the result says, "Chicago Birth Certificates" or "Chicago Birth Registers," then they almost certainly won't.

Death certificates, outside the city of Chicago, 1878-1909. Again, note that they have county records, but do not hold Chicago certificates. These records that match the Illinois Statewide Death Index, Pre-1916 entries that say "COOK COUNTY" in the city field. (Don't get confused by the word "COOK" in the county field.) Or, if you've found them in an Ancestry or FamilySearch index, use the approach mentioned above to determine if they are city or county records.

Marriage licenses, 1871-1915. These records are indexed in the Illinois Statewide Marriage Index, 1763-1900 and on Ancestry and on FamilySearch. It doesn't matter if the ceremony took place in the city or county; they're all grouped together and if you have the license number you should be able to get the record from IRAD.

Unique collections. IRAD also holds some records you might not think to search unless you knew they were there--saloon licenses, dog licenses, insanity records, and school inspectors' minutes, to name a few. I don't believe the staff can undertake extensive searches in unindexed records, but the collections are easily accessible if you can go in person.

Three of their unique collections have online indexes and they will take requests to retrieve the matching records.