The Search for Mrs. Nelson: Part 6

August 21, 2011
The naturalization record for Sigurd Nelson that I ordered from the Iron Range Research Center arrived last Saturday and I'd give the process a 9 out of 10. The online index was easy to search, the online ordering process went smoothly, and communication from the Center was great. Three days before the document arrived I received a pleasant email letting me know that it had been mailed. The only thing that would have made it better? Receiving the record in digital format a few days quicker. (See The Search for Mrs. Nelson: Part 5)

If you've read previous posts, you'll remember that I am searching for the wife and child of a man named Sigurd Nelson. The researcher who's interested in them believes that they died of influenza before 1920 but he doesn't know anything more about them.

I have reason to believe that the Sigurd Nelson who was living in Duluth is the man the researcher is interested in and I was hoping that this Sigurd's naturalization record would give me the name of his wife and child.

Finally--a clue. The naturalization took place on 7 May 1920 and Sigurd's wife was listed as Myrtle, born 19 November 1899 in West Duluth, Minnesota.

A quick search of the 1920 census told me that Myrtle's middle initial was "L." 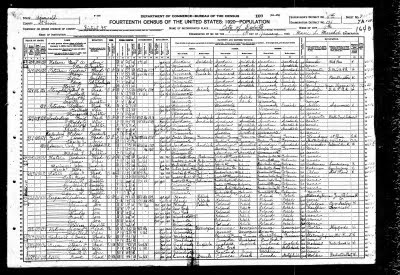 So, the Duluth Sigurd Nelson married a woman named Myrtle L. sometime between 5 June 1917 (draft registration card) and 8 January 1920 and it's very likely that he married her in Duluth.

Even though the researcher told me that he thought the wife and child died before 1920, I don't think I can rule this person out. It's possible that the "before 1920" conclusion was made because the family hadn't been able to find the family in the census in Chicago.

So, what's the next step?

Look for the death of a Myrtle Nelson in Duluth just after 1920?

Look for Myrtle's death in Chicago?

Look for a birth record to a child born to Myrtle and Sigurd?

See if I can find Myrtle and Sigurd in the 1930 census to rule them out?

Check Duluth city directories to see if Sigurd appears and if he then disappears?

What do you think? I'd love to hear your ideas.

Reed said…
An easy next step is the online Minnesota Death index at http://people.mnhs.org/dci/

I did a quick search ("exact" spellings) for Myrtle Nelson. The 7th search result (of 86 total) is for a Myrtle L Nelson, died 1925 in Hennepin County (i.e. the Minneapolis area). There are other parameters you can specify to narrow or widen the search.

Might or might not be your Mrs. Nelson, and one of the other results might be more relevant, but the index is a useful resource. It is only an index though, but you can use it to order the actual record.

Reed said…
Here's a follow up to my previous comment, re using the MN Historical Society's online death index.

I repeated the search for Mrs. Nelson, only this time I specified only the last name (Nelson) the county of death (St. Louis, home of Duluth) and a time range of 1920-1930.

I also found it interesting that Myrtle was among 25 women indexed with "Mrs." as a "first name."

I went to familysearch.org and searched the "Minnesota Deaths and Burials, 1835-1990" database for "Myrtle L Nelson" and year "1922." And I think we may have found the right one (see especially the spouse's name and her age at death):

It's also nice that her parents' names are listed.

Cyndy said…
Hi Reed. I think you have it! I followed the same path through the death index and FamilySearch looking at the Myrtle L. who died in 1925 but I didn't catch the one who died in 1922 and I think it's the match. I'm also thinking that if she had a child, it's likely that he or she would be buried with her.

Now the real question is whether or not this is really the right Sigurd.

I'll follow up, giving you full-credit for the find. Many thanks! Cynthia
5:46 AM