August 10, 2011
Note: If you haven't been following my posts, you can find background information for the search in The Search for Mrs. Nelson and Child Begins.

A number of years ago I spent some time searching Duluth newspapers at GenealogyBank.com and so I decided to see what I could find out about Conrad and Sigurd Nelson using that approach.

A search for "sigurd nelson" in Minnesota newspapers brought up seventeen results. One was a mis-match. Seven were for a Sigurd G. Nelson who was an elected representative from Ironwood, Michigan. That left nine possibilities. 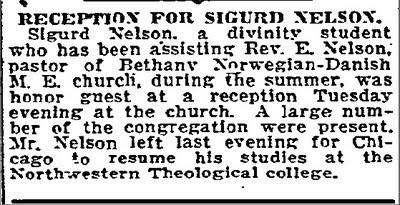 Among them I fould Sigurd the divinity student and Sigurd the young single man attending social events. It's possible this is the same person. Then I found Sigurd the soldier--possibly two men. One was mentioned as Sigurd and the other was mentioned as Sigurd G. Sigurd G. returned to be naturalized after the war. And then there were two mentions of a Sigurd being arrested for vagrancy, one before the war and one after. It's hard to tell if this is one man or two but it's likely that it's not the divinity student.

1912: Sigurd charged with vagrancy; testimony by boarding house matron from 615 W Superior who caught him going through another boarder's pockets

1915-Nov: Sigurd Nelson to speak in the Norwegian-Danish M.E. Church

1915-Nov: Sigurd Nelson to speak in the Norwegian-Danish M.E. Church

I'm not sure what to think except that the Sigurd G. who went to war is a possibility if the brother of the man I'm looking for was living in Duluth. I'll think on it over night and decide what my next step will be. In the meantime, if you have suggestions, please post.