August 09, 2011
I am searching for the unknown wife and child of Sigurd Nelson. (See The Search for Mrs. Nelson and Child Begins for details.)

FamilySearch's Illinois, Deaths and Stillbirths, 1916-1947 seemed like a good first step because spouse names are included the database.

I chose the advanced search option typed in "sigurd nelson" with 1916-1922 with "Exact & Close match" selected. No matches were found. I removed the dates and searched again. This retrieved three records:

*Sigurd A. Nelson who died in 1944, wife Emma, parents listed

*Anna Cathrine Maurer who died at the age of 44, the daughter of Sigvard Nelson.

I decided to follow up on Sigurd A. M.

A search for "sigurd nelson" in FamilySearch's Illinois, Cook County Marriages, 1871-1920 brought up 13 matches. The researcher told me that Sigurd arrived in 1912, so repeated the search with a narrower date range and got five results. Four were for women named Sigrid. One was the match for the parents of Sigurd A. M. 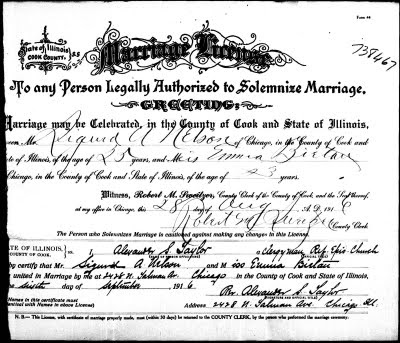 I decided to learn more about Sigurd, Emma, and Sigurd, Jr. from the 1920 census from Ancestry.com. 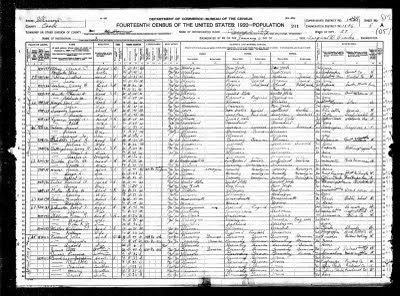 Notice that the marriage license lists the bride as "Emma Bietan" and the death record gives the mother as "Anna W. Bietan" and the census lists the wife as "Emma" with "Sigurd, Jr." in the household. I think Emma and Anna are the same person.

Looking back to the first death index search, there's a Sigurd A. Nelson with wife Emma who died 16 Jan 1944. I think I can cross this family off the list of possibilities.

So, back to square one a little farther ahead.

I decided to make a quick check of the directory at Footnote.com. The best choice was 1917 but there was only one image available. (I KNOW that but I always forget. I'll have to use the microfilm copy the next time I'm at the Family History Center.) I checked 1923 instead.

There were four people of that name in the city in 1923.

I think I'll poke around in World War I draft registration cards next to see if I can figure out where Sigurd was living and what his occupation was. If I had an address, I could look for matches in the Chicago Death Index, 1871-1933.